Since retiring as a lion, I have grown to admire and respect the lambs. As it turns out, they are the ones that have not yet been rendered idiots by the ‘health and fitness’ industry. Their meekness comes not from weakness of character, but from highly justified scepticism. Their sideward glances stem not so much from question such as “what am I doing”, but rather “what the hell are you doing..?” And quite rightly so. What the hell are you doing?

A quirky article from some place new (to me). The author (who is completely unidentified across their entire web site as far as I can tell) has a fun way of turning the tables on the standard lambs and lions. They also rail against the mainstream health and fitness representations of, well, “health” and “fitness”.

As autumn settles in where I am, I’ve been looking ahead to winter with longer nights, brisk days, etc.. I also looked back at the shape I’ve been in in years past. I’m not lamenting, “if only I had my youth back.” Rather, just thinking about health, movement, and what would be the minimum effective dosage of some exercise to move me in the direction I want. (That DuckDuckGo link should make you wonder why a medical-sounding phrase is used most relating to exercise not medicine, and strength training in particular.)

Sometimes—by which I mean any time running comes up—I say that running is both the best thing for me, and the form of activity I hate most. Both of which are untrue. What’s actually best for me is zone-2 aerobic exercise and that’s sometimes what I get when I run. It’s best for me, because that is the main driver of base fitness until you get well up into being a competent athlete. But usually, being quite over-weight at the moment, any running drives my heart-rate above the surprisingly low/slow zone-2. The second part about hating it is also untrue. It turns out that one time—the one single day apparently—that I was ever in shape, I enjoyed running. I was walking, the weather was beautiful, and I had an irresistible urge to run, (and so I did.) But, literally, that happened once.

Anyway. It’ll suffice to say: I spent a few weeks recently thinking about going full-on nerd with zone-2 training. To do it right requires planning, scheduling, and—sources vary—between 150 to 180 minutes exercising each week. And warm-up and cool-down time are not included in those weekly times. Honestly, the deal-breaker was I’m seriously pissed at FitBit, (and their watches are useless without a FitBit account,) and I refuse to spend many-hundreds on an Apple watch. Also, my $30 Timex is nicer, for my definition of “nicer.”

My thinking continued, and eventually I thought: I should just walk back from Mordor.

…except this time I’m not going to bother trying to track the actual mileage. Just walk as many days as I can. Listen to some podcasts some of the time. And basically just stroll along thinking, “If this isn’t nice…“

25 days ago I started a wee challenge: Trying to train every day for 100 days straight. I’d done this challenge in 2017 to mixed results. Physically it was mixed; training every day is too much and I ended up defining some recovery days as “training.” Mentally it was also mixed; I wasn’t trying to build a new habit, so the “daily” part didn’t work towards that, and it became a serious drag forcing myself to train every day.

When I finished the 2017 challenge I knew it sucked and definitely didn’t want to make that a thing I did often, nor even yearly. When 2020 rolled around—my physical activity was exactly as usual, with me outside doing various things just as much as 2019—but I started thinking about doing some more rock climbing (outdoors, on real mountains.) That prompted me to think about getting into better shape. For me, that’s primarily removing fat. For the first couple months I concentrated on diet, which means focusing on when and how much I’m eating.

After I peeled off 10 pounds of blubber, that’s when I had the idea to take on a fresh 100-days-of-training challenge. It was exactly what I remembered it was like: It sucks. In years past I would have just embraced the suck and pushed through the thing. Note that I would have constantly considered myself to be failing. Entirely missing a day here and there, realizing I need a rest day and defining recovery as training, and just generally nagging myself with, “I should go train.” Instead I simply punted on the whole thing and deleted it entirely.

…aaah, yes, the power of “no” when you have a bigger “why” burning inside you.

When’s the last time you punted on something?

I’m pushing 50 and the challenge of getting enough physical activity into the day is, well, a serious challenge. My biggest challenge though is my unhealthy relationship with food, and my self-imposed stress. But, I’ll set those later two aside for another day.

Today I want to talk about a neat little program by Jerzy Gregorek, (who’s known as the “Lion of Olympic weight lifting,”) called the Happy Body Program. I’d been toying with this program for over a year, before I got serious a couple months ago.

In his “Happy Body” book, Gregorek has a very direct and simple way of defining, measuring and working towards a happy body — meaning one that is basically fit — in the sense of fit for living. There’s a companion poster)—it’s pricey but rather useful to put the entire program up on your wall.

Every morning starts with me doing about 20 minutes of mobility work, followed by Tracy and I running through Happy Body. Currently, we’re working our way up in the number of circuits it calls for, but it’s easy to do and as quick as real work can be.

(Losing weight and fixing my feet are the other two things.)

I recall Ido Portal saying in a podcast with Daniel Vitalis, something to the effect of: Your spine is for orienting yourself in your environment. Your spine’s myriad of joints should be flexible and powerful. At that point in my journey, I wasn’t even really thinking of my spine as joints; It was simply something with an upper and lower portion, both of which were frequently in significant pain. That was the exact moment when I became convinced my spine was weak.

…and then I read _Walking Found to Provide Significant Relief from Back Pain. At the time, I was preparing for a parkour trip to Québec for an event they where having with the Yamakasi. So I was already focused on finding my weaknesses—my back!—and trying to fill them in.

…and then I read Walking, an article by Steve Kamb about walking to Mordor. Yes, that Mordor. It’s a challenge to walk 1,779 miles (but see below.) I took my exercise tracker out on a few of the common walks I like, and noted the mileage. I’ve been keeping track of the total ever since.

It’s 1,779 miles to get from Hobbiton to Mt. Doom. Then riding the eagles back to Minas Tirith cuts the return walk to Bag End down to 1625 miles. Plus 467 more miles, roundtrip to Grey Havens. Brings my total goal to 3,871 miles. This is roughly the entire length of the Nile river, or the distance from the surface to the center of the Earth. (Mid 2019 I’m a few hundred miles from Mt. Doom.)

There’s so much that can be said about walking. But rather than read more about walking, why not go for a walk?

This post is from some quick notes I made in August 2018. I’m only just getting around to publishing it now, 8 months later, as part of this series. Today, at ~230 pounds, 215 seems like a dream.

I’m recently back from traveling to Denmark and France to attend two Parkour events back-to-back. As usual when I’m traveling, I don’t attempt to keep up my normal routines so there’s no data recorded for most of July 2018.

I’m happy to return still around 215 as I try to get back to my routine of “chaining together” my mornings. Compared to July, I’m not as active, but I’m trying to AVOID the, “let’s be super active and try the 100-days-of-activity challenge,” mistake I made in 2017 when I came home from the same events all excited about movement.

Anyway, what about that ratio of 1958? …it’s so low that it’s not even on the graph! This reminds me of two things I believe I’ve noticed: 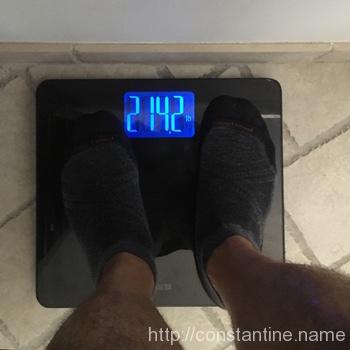 I’m not quite ready to publish scantily-clad selfies… so I left my socks on. I’ve a target weight in mind which corresponds to 20-year-old-me and a good photo from 1991.

A visiting Finn mowed my lawn for me yesterday, and so I had time for one last run on this continent before I leave for a triple-stop Parkour trip in about twelve hours. 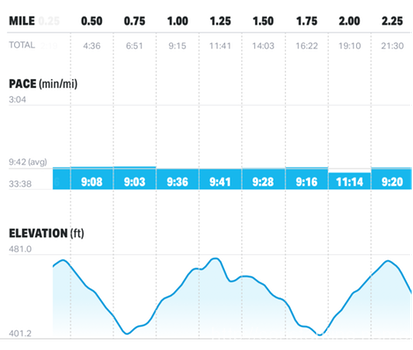 The graph is a little odd because I didn’t stop the tracking immediately, so there’s a huge bar for the last split (not shown.) It’s a lollipop route, so the 11-minute split is up the slight hill which I ran down at ~9-minute pace. The whole run came in about 9:33, which is right on the fastest I’ve ever run this. This time was much more uniform in pace than the last time I ran this.

Why do I post this stuff? Because whomever you are, whereever you are in your physical fitness (or complete lack thereof), you can simply do what I did: Start where you are.

Sneak peek at something I’m writing up from a year-long experiment. This is a graph of weight and waist measurements (plotted on the left in non-obvious units), and the ratio of those numbers (plotted on the right, x1000; so “2000” is a 2:1 ratio in the weird units of course) The measurements jump all over the place, but when I measure every day, a polynomial curve fit shows what’s going on over this three month window. Much much more to write about this…

It’s a very long podcast, but I really enjoyed getting to know Jerzey. Around 2h39m in, as they’re wrapping up, he says…

I see that the first 50 years is your first body, but also it is “nature versus nurture.” So you have the nature; you use the body, but you don’t care. The body is fantastic, it is restoring itself, it is recovering itself, and it is very, very forgiving. The next 50 years is the nurture. It’s time to be intelligent, it’s time to have goals, it’s time to have plans, it’s time for that. So if we start nurturing the body we can easily go for another 50 years, right? So that’s our second body. There is this gracefulness on the road that we need to learn. Once you get that gracefulness then your journey can be pleasant, your journey can be proressive and your journey can be joyful.

I’m not quite 50, but this really resonated with my recent [several years worth] work, efforts, journey and progess.

Link to Jerzey’s “Happy Body” book which I’m really enjoying. He has a very direct and simple way of defining, measuring and working towards a happy body — meaning one that is basically fit — in the sense of fit for living. There are several companion books, (and a companion poster). I don’t feel the need to buy the books, yet ;) but the poster might be handy.