In my journey writing thousands of blog posts I’ve developed certain habits and a style. There have been a precious few points where I’ve intentionally made a significant change. I used to lead with the URL followed by the pull-quote, before changing to a more normal style of a quote with a following attribution. At one point I started adding slip addresses, and at another point I started reigning in my use of exclamation marks.

Recently I asked one of my mentors, Jesse, for feedback on some copy, and he made a comment about his personal rule to be very intentional about using the word, “but”. I didn’t think I was overusing it, but [oh no!] I often used it as a conjunction— I often used it as a way to connect two sentences to create a point and counter-point structure— Dammit, Jesse. Now I cannot unsee every “but” as a weasel word. You suck. Thanks for making me better.

This past weekend I had the opportunity to attend a Winter Immersive retreat hosted by the Movement Creative. There I finally got a chance to sit down with Jesse and record an interview. Be sure to follow the Movers Mindset on the web site, or wherever you prefer to listen to podcasts!

I surrendered yesterday with a heavy heart.

Since July 20th, 2015, it has been a long year of ups and downs. I’ve made some massive improvements in strength, and form, for the activities I’d chosen. But I still have much work left to do — both in terms of the number of reps left before the 10,000 goal, and in terms of the quality of the activities I had hoped to reach along the way. 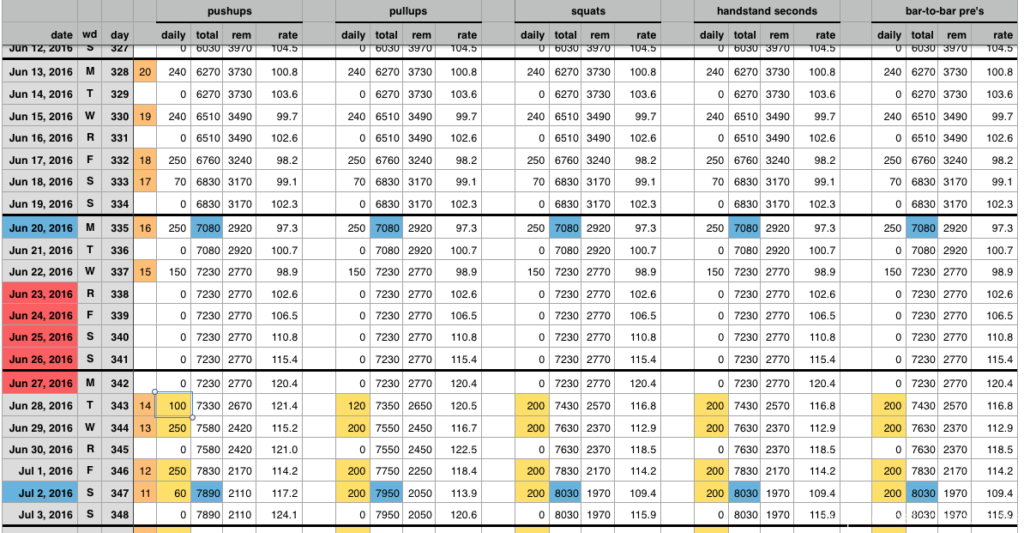 A few weeks ago, I started a sprint to the finish. In an attempt to make the 10,000 goal within the dwindling days, I would need to do approximately 200 reps of everything every-other-day for several weeks. I started using a resistance band to ease the strain on my shoulder during the pull-ups, but even that was not enough to preserve my shoulder. This past weekend, at a Parkour event in Boston, it became painfully(!) clear that my shoulder injury was returning.

I have a Parkour trip planned in August, and I must begin that with my shoulder at 100%. I am forced to choose between a good shoulder for my trip, or the remaining 2770 pull-ups. I am choosing my shoulder.

Now, I find I have to write the “wrap this series up” post sooner than expected. So, what have I learned?

This 10k project is the largest challenge that I can ever recall attempting. It is the only thing I’ve ever tried to accomplish which spanned the course of one entire year. It was ambitious, huge and has taught me a lot about my ability to stay motivated over a long time frame. (Pro tip: I suck at staying motivated.) I learned (or refined) several new skills involving daily and weekly planning of workouts, planning for road-blocks (winter weather, holidays, trips) and recovering from injury.

Perhaps one day I will do it again and make the goal. But for now, I have other things to do.