There are some non-obvious ways to use clamps to build unusual things. Early on, in the first “cube” build, I mentioned you could do pullups and work climb-ups. But this build is way better for building a stable, nearly 7-foot high bar.

There’s no layout shot per se, but here’s a pair of assembled 45° apex A-frames. (Note that the unused outlets in the middle both face up.) 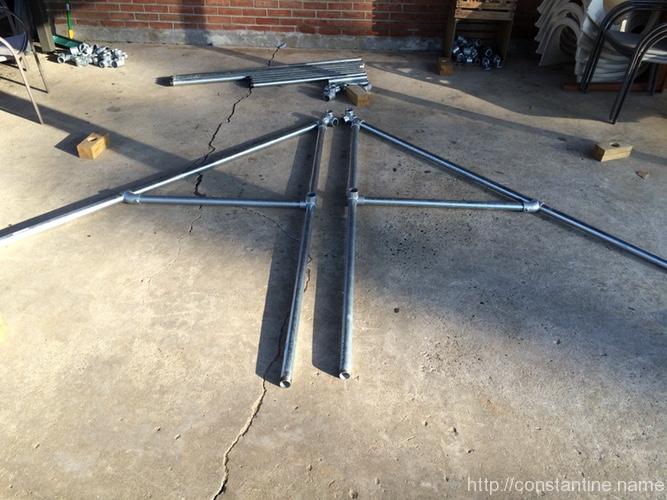 There are two 90° two outlet tees in the middle of the photo, 45° tees on the left and right and 3-foot brace pipes. This looks totally asymmetric, right? Here’s a close up of the tops of the A-frames: 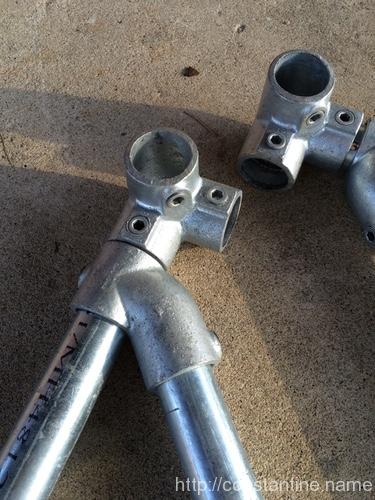 Here’s a detail of how you put the top cross bar into the clamps; do not over-insert the ends because we need the width to be correct. 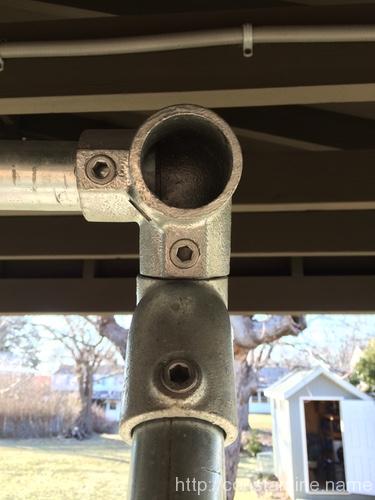 Wait, this is a thing? It totally is… 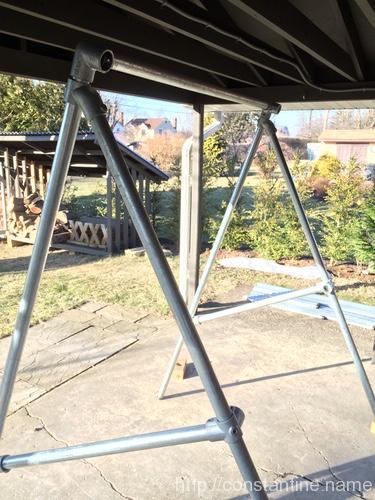 Very tall, very stable for climbing/hanging and you can swing a bit (if you like sketchy swing sets).

We have 5-foot pipes and tees left, so let’s add some more side pipes: 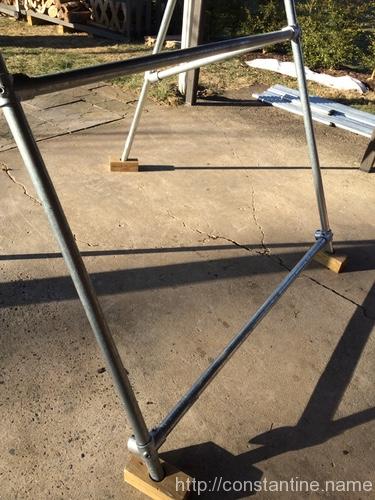 I love how the outlets on those tees we used early on, suddenly are just perfect for a cross bar. Obviously, that lower one could go anywhere on the set. If you have extra 45°s, you can add some 1-foot diagonals on any (not the top – won’t work up there) of the cross pipes. I’d put two diagonal doing down from the mid-height cross-pipe; that would give a huge stability gain without being in your way.

There are other variations to this build: You could have used 5-foot pipes for the cross-bars when you laid out the A-frames. They’d be much lower down on the sides. You’d still have the fourth 5-foot pipe to make that mid-height cross-bar. And of course in both variations you have 3-foot pipes that can be added as diagonals if you have the extra 45°s. Remember the rail precisions build, with the diagonals that were “off” but still sort-of fit? You could get a 3-foot diagonal up on the top most cross-pipe.

I really like this build. It’s a sort of “sleeper” build where you start feeling like your wasting clamps at the apex of the A-frames and then it turns into this very unusual geometry. Most scaf (except of course Blake’s scaf in Boston) ends up being all 90° and 45° systems.