But among all of nature’s beauties, nothing inspired him more than trees — those eternal muses of scientists, artists, philosophers, and poets alike — and what Margaret Fuller so unforgettably called “that best fact, the Moon.”

I hesitated to share this. …because the book she’s writing about is out of print and only rather-expensive copies seem obtainable. But obviously I came down on the side of, “it’s trees, I have to share this.”

I was once in random conversation with a professional arborist. I cannot recall for certain even who or where or what we were discussing. (But I’m certain is wasn’t something as obvious as they were at my house trimming a tree. It had to be some social encounter.) He dropped a phrase which has stuck with me ever since. He mentioned, “caring for The Big Plants.” I feel that, somehow, he said it in capitals, just like that.

I’ve seen a couple of trees in my day; in Muir Woods, off the beaten paths in Japan, the Rockies. There are some singularly towering specimens in my neighborhood. I like to snap random photos of trees too. I don’t have a point coming, either.

Way back in “the day,” Carl Sagan made a comment in one of the original Cosmos episodes about DNA. As I recall, he was standing near a Big Plant, as that arborist would say, and he pointed out that we, and the tree, contain identical machinery for processing identically functioning DNA. There’s just a relatively small amount of encoded information making a “me” instead of a tree.

Test ideas by experiment and observation. Build on those ideas that pass the test. Reject the ones that fail. Follow the evidence wherever it leads. And question everything, including authority. Do these things and the cosmos is yours.

Triple bank shot! Brain Pickings/Maria Papova, Ann Druyan and Carl Sagan. Brain Pickings is one of the web sites where I have read every single post. Time well spent in my opinion.

I read now for the same reasons I read then — to feel less alone. But I read for more than that: Reading teaches me the answers to problems I haven’t had yet, or to problems I didn’t even know how to describe. And when I feel less alone with what troubles me, it is easier to find solutions. A book to me is like a friend, a shelter, advice, an argument with someone who cares enough to argue with me for a better answer than the one we both already have. Books aren’t just a door to another world — each book is part of a door to the whole world, a door that always has more behind it. Which is why I still can’t think of anything I’d rather do more than read.

~ Alexander Chee, from A Velocity of Being, which I found via, https://www.brainpickings.org/2019/06/11/alexander-chee-a-velocity-of-being-letter/

I’ve mentioned elsewhere that growing up, it was a 20-minute drive to anything. A true bookstore, or even a public library, was farther still.

But I do distinctly remember the feeling of being among books. At a book store, at my high school’s library, at the closest [small] city’s public library, and eventually at my university’s two libraries. To be honest, I don’t know when last I thought of that feeling, until it bubbled up, just now as I write. The lighting. The sound-scape. The smells. The furtniture. And of course the books. Knowledge and experiences and surprises and questions beyond belief.

(Woa! I just remembered the huge amount of time I spent thinking about one day having a proper study. My own personal library, meets workspace, meets inner sanctum. And I’m reminded that I’m currently obsessed with finding a good chair for reading.)

But it’s all about the books.

As with many things Maria Popova creates, anything I add would simply detract. Click. Thank me later.

Books are key to understanding the world and participating in a democratic society.

I don’t think it has to be physical books — recall Mr. Sagan is from the pre-Internet epoch — but definitely *reading*, and definitely you have to be doing the hard work of deciding for yourself what you are reading.

A book is made from a tree. It is an assemblage of flat, flexible parts (still called ‘leaves’) imprinted with dark pigmented squiggles. One glance at it and you hear the voice of another person, perhaps someone dead for thousands of years. Across the millennia, the author is speaking, clearly and silently, inside your head, directly to you. Writing is perhaps the greatest of human inventions, binding together people, citizens of distant epochs, who never knew one another. Books break the shackles of time, proof that humans can work magic.

Not only could nobody tell me, but nobody even had the sense that it was an interesting question. They looked at me funny. I asked my parents; I asked my parents’ friends; I asked other adults. None of them knew. My mother said to me, “Look, we’ve just got you a library card. Take it, get on the streetcar, go to the New Utrecht branch of the New York Public Library, get out a book and find the answer.” 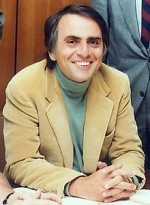 I would love to believe that when I die I will live again, that some thinking, feeling, remembering part of me will continue. But much as I want to believe that, and despite the ancient and worldwide cultural traditions that assert an afterlife, I know of nothing to suggest that it is more than wishful thinking.

The world is so exquisite with so much love and moral depth, that there is no reason to deceive ourselves with pretty stories for which there’s little good evidence. Far better it seems to me, in our vulnerability, is to look death in the eye and to be grateful every day for the brief but magnificent opportunity that life provides.