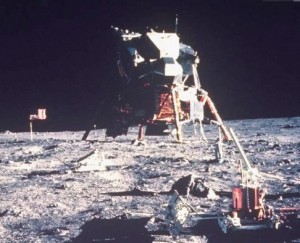 There is a four-part interview series with Neil Armstrong from evoTV’s series, The Bottom Line. Armstrong did not give many interviews, and the show’s producers say this was the first on-camera interview Armstrong had done since 2005.

This is a very special interview series. It includes Armstrong describing, for the first time, the lunar descent side-by-side with Google Moon imagery. He also gives his thoughts on leadership and taking risks to innovate for the future, and speaks candidly on his early life The series also includes previously unseen footage of the lunar descent. 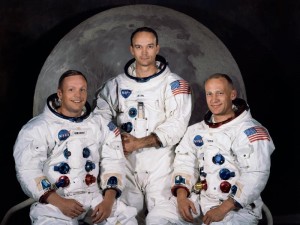 I was home sitting at my desk when I first noticed the news of Mr. Armstrong’s passing. It seemed to me, that I had just experienced one of those defining moments; My parents’ generation has the infamous, “where were you when Kennedy was shot?”, or apropos here, “where were you when they landed on the moon?” At a deep level, I suddenly felt I would always know exactly where I was when I found out that Mr. Armstrong had died.

In the statement released by the family of Neil Armstrong following his death, they said, “For those who may ask what they can do to honor Neil, we have a simple request. Honor his example of service, accomplishment and modesty, and the next time you walk outside on a clear night and see the Moon smiling down at you, think of Neil Armstrong and give him a wink.”