The bulk of this series is about the various major changes I have made. In the big picture sense, it’s just a long list of posts with actionable ideas for you to consider. Unfortunately, accomplishing any of these changes requires you to be able to break old habits and create new ones.

There’s plenty of information available on habit change, so I’m leaving the psychology of habit change out of this series. Instead, I’m going to suggest one activity: Keep a habit journal. I started my habit journal, began by trying to fix my sleep, and slowly began my upward spiral.

For the rest of this series I won’t – I promise! – tell you the back story of how I discovered and explored each change I’ll be describing. Instead, I’ll compress each as much as I can, with as much actionable intel as possible. But for this “Strategy” part of the series, I want to tell you the story of how I discovered and started my habit journal.

This entire “Changes and Results” story begins with me realizing I needed to get more, quality sleep. It was a slow realization, and it sprang from some online articles I had stumbled upon. As I read more, I became curious about my sleep, and found I was often thinking about my sleep and how to improve it.

To make any change, new knowledge is required; What would the change look like? What are healthy sleep cycles, duration and times-of-day? What temperature, light and sound levels are conducive to good sleep? What room details (the bed, the colors, the room layout) and room uses (is the room multi-use or a space where I only sleep) are conducive to good sleep? It turns out that all of that knowledge is out there, and so I dug into it to varying degrees until I felt I had satisfactory answers to some of my questions.

But, all that new knowledge accomplishes nothing.

I had identified a problem, (“get better sleep”,) which gave me new questions. From there, my curiosity led me to new knowledge. At that point, I knew what I wanted to change, but right there is where I had always failed.

One day, still frustrated and making no progress on improving my sleep, I read an article about Ben Franklin. Franklin had set out to improve himself over the course of several years. He came to the conclusion that there were too many different things to focus on for him to improve himself in one broad effort:

It was about this time I conceived the bold and arduous project of arriving at moral perfection. I wished to live without committing any fault at any time; I would conquer all that either natural inclination, custom, or company might lead me into. As I knew, or thought I knew, what was right and wrong, I did not see why I might not always do the one and avoid the other. But I soon found I had undertaken a task of more difficulty than I had imagined. While my care was employed in guarding against one fault, I was often surprised by another; Habit took the advantage of inattention; Inclination was sometimes too strong for reason.

I had reached the same conclusion, (but, alas, without the same eloquence,) when I was unable to change things by simply desiring them to change. Goals such as: sleep better, be less grumpy, and lose some weight, all failed to materialize.

Franklin went on to create a grid, with a row for each virtue and a column for each day of the week. At the end of each day, he put a mark if he felt he hadn’t lived up to that virtue on that day. The goal was then to have no marks on the grid at the end of the week. Each week he would focus particularly on one virtue (and he cycled through his 13 virtue goals.) He began each week by re-reading a small reminder he’d written about the week’s focus virtue (for example, “Humility: Be not Achilles; Imitate Socrates.”) He would then set about focusing on that virtue during the week. Franklin was working on a list of virtues such as Tranquility or Temperance, but his system works perfectly well for anything.

[O]n the whole, though I never arrived at the perfection I had been so ambitious of obtaining, but fell far short of it, yet I was, by the endeavor, a better and a happier man than I otherwise should have been if I had not attempted it.

Inspired by Franklin, I began my habit journal more than ten years ago. At the beginning of each month I create a table with the dates across the top, and a row for each thing I’d like to work on that month. Initially, I had a small notebook just for these monthly habit journal tables. I started with rows for 6, 7 or 8, hours of sleep and put a corresponding mark for each day. This created a rough graph running across the month. That visual graph really gave me a push: “Yesterday’s mark is 6.5 hours, if I go to bed right now, I can put tomorrow’s mark at 7.” (I’ll go into the details of my sleep changes in the next post.)

Eventually, if something becomes an ingrained habit, I remove it from the grid; If it becomes a problem again, I add it back and work on it again. Sometimes I don’t get around to filling in the table, and the next day, I’m thinking, “Not two days in a row! Fill it in!” Which serves to further reinforce my paying attention to my daily goals.

(When I travel, I usually leave the habit journal behind and track nothing. Generally, I don’t have the time and my schedule is changed, so filling it in or even sticking to the habit plans would be tough. But such trips — little breaks from the habit journal — serve as test runs with the training wheels off. A three-day weekend, for example, gives me a lot to think about when I pick up my habit journal upon returning home to my normal routine.)

The monthly habit journal tables grew in size and complexity as I added and tracked more things, and eventually tracked many things. But there’s no need to start with complexity. Start with columns for the days of the month, and make a row for that one thing you want to work on first. Next month, assess how you did, adjust as necessary, and add a row if you want to work on a second thing.

In the very beginning, I used a small, square-gridded, notebook, but my tables eventually outgrew the page size. Years later, I started journaling and I didn’t want to have both a habit journal and a “regular” journal. So I invested the time to copy all the historical grids into my journal so I’d always be able to refer to them.

So what does this actually look like? Here’s my (recopied) habit journal table from the very first month, December 2006: 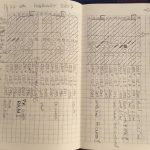 That’s really all there is to it. These little grids are the framework on which I hang whatever it is I’m trying to change.