This was the incredible cherry-on-top for this entire Colorado adventure. Hawk-Eagle Ridge is this side, side ravine tucked up behind the Wind Tower just inside the beginning of Eldorado Canyon.

We took this photo (below) on the way out. The tall rock, on the right, closest, is the Wind Tower. So you hike up to the right, between the Wind Tower, and the next mass of rock (on the left in the photo.) Hawk-Eagle Ridge is the crumbly-looking, sloped wall in the middle of the photo. So it’s “the first lefthand ravine” as you go behind the Wind Tower. 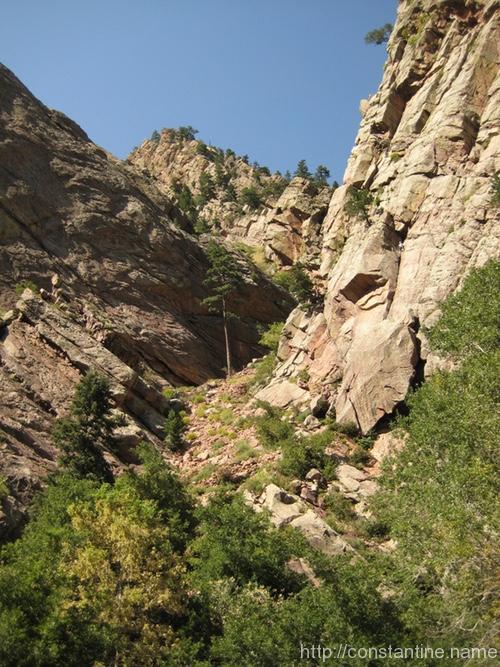 …but we didn’t know that going IN. Instead, we didn’t notice this huge, house sized block of rock at the very bottom of the Hawk-Eagle Ridge ravine… it didn’t look like a block that had fallen in the ravine; The ravine was basically not-a-ravine as you hiked past this huge block. So we hike to the SECOND lefthand ravine and busted our *sses slipping our way up this horrid scrabble of avalanching rock, through all sorts of scrub bushes and piles and piles of poison. I expected to step on a snake or three at any moment.

Then we realized we were on TOP of Hawk-Eagle Ridge requiring us to do this sketchy rappel. Or rather, we rigged up a good rappel, and then Mike lowered the gear and rappelled off a couple of (what looked like) ratty old shoe laces. (See the two photos with ropes below.)

The second and third photos below, are the view of the Basile in the main part of Eldorado canyon as we climbed up around ONTO Hawk-Eagle. That’s a road down there at the bottom of the Bastile.

We eventually found a spot of shade at the base of this neat little climb (in the third and fourth photo.) In the second photo, you’re looking back out of Eldorado canyon, so you can get a feel for how we’re just sort of out of sight. The ravine was like hiking back in time. It was clear no one had be up here for decades. This was only the second time in the entire trip that I felt like we were out doing something not normally done. Everywhere else we climbed, it was always well-beaten trails and clearly obvious where to climb; This one was a real adventure. Albeit, a low-height, pretty-near-the-Eldo-access-road adventure.

Here, Mike had scrambled to the top and setup a top-rope anchor. We each took turns scrambling up this neat route. As I’ve said many times, every climb in Colorado had very different rocks. This one was blocky, but the rocks were very natural — normally, oft-climbed routes have their rocks polished pretty smooth and clean to the touch. This rock was very coarse and had a texture that rubbed off on your hands. There was also a very dry moss on a lot of the rock. Overall it was a very different tactile feel. Generally, you get used to your shoes “pasting”, (meaning the flat sole of the shoe has enough friction on plain rock face that you can just stand on very steep faces.) But this rock didn’t paste at all, because there was this every-present layer of fine “dirt” that rubbed off on your shoes (and hands) making everything this unusual sort of dry-slippery. In reality, it was simply the rock naturally weathering, untouched by climbers for who-knows-how-long. (At least, on the routes we climbed.)

Mark — the guy in the white shirt — had opened routes here (aka, “been the first ever to climb”) about 30 years ago. Mike and I spent a lot of time enthralled, listening to stories, and hearing how “these [full-grown] trees weren’t here last time!” I felt it was quite a privilege to get a belay from Mark.

As always, it’s over all-too-soon, and the hike-out commences… 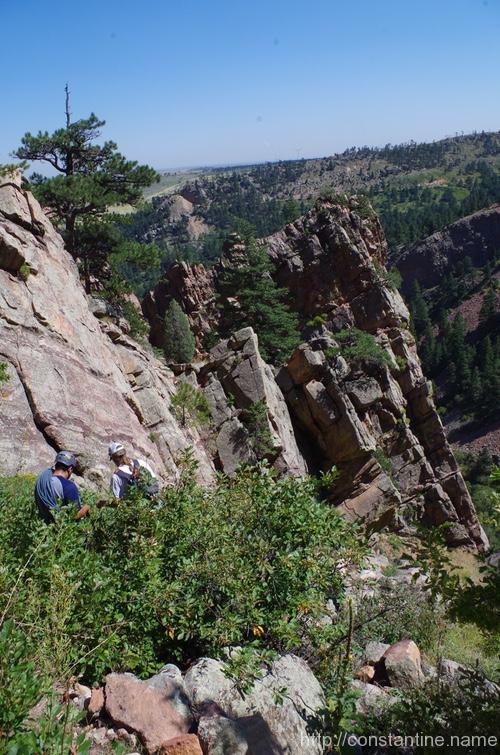 …and I very much like the fact that I get to end my entire series of Colorado posts with a great shot of Mike and Mark!

Cheers gentleman! It was a grand adventure!! 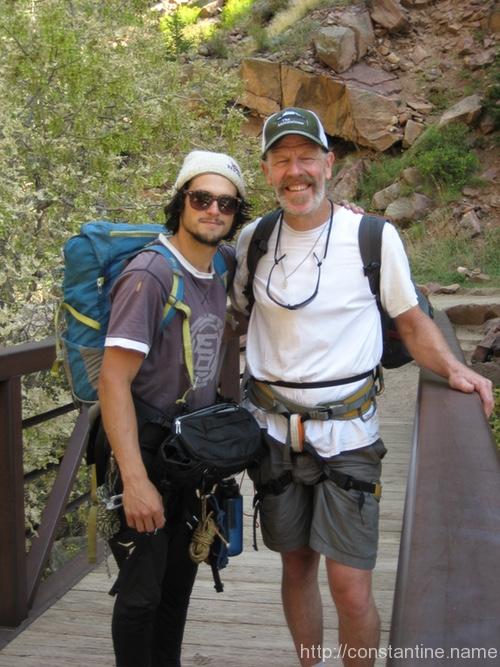