We picked Organ Pipes to be our last climb on Lumpy Ridge. This was our last day in Estes Park Colorado. We had been camping just inside the Rocky Mountain National Park at the Aspen Glen campground and it was a short drive to the Lumpy Ridge parking area.

As we approached the parking area, the Twin Owls are impossible to miss. They look exactly like two roosting owls. Below them, just in front of them, is a light colored triangle of rock. It actually took us a bit of hiking around to find our climb. But as we drove away, we realized Organ Pipes is tucked in the shadow, just to the left of the big triangle of light-colored rock. When we reached the top of the climb, we were at the base of the Owls. 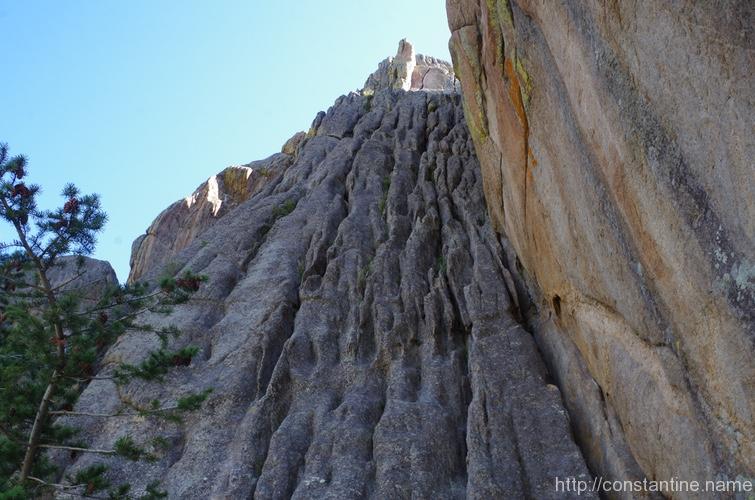 Above is the view looking up Organ Pipes — it literally looks like organ pipes. Some of the undulations are easily grabbed by hand, some are large enough for you to stand in, or to work up them like a miniature chimney. It’s about 20 feet wide and runs up about 150 feet. Near the top, the rock changes colors from this dark grey, to a lighter color, and it just happened to change colors where the shadow fell. So there’s a ledge at the top of the grey, where Mike eventually set up a belay station and snapped about 300 photographs.

The video above gives you a quick tour of where the climb is situated.

Above is a small selection of the many spectacular photos Mike took. Throughout our trip, he was learning to use his camera and this climb was the culmination of him getting to try everything since the climb was pretty easy, with a short pitch where we could easily see each other and communicate.

The vertigo-inducing video above makes the climb seem steeper than it really was. The further we climbed, the steeper it was, but it was “only” vertical at the top — it doesn’t overhang or lean out at all. You can begin to hear that it’s getting windier…

This isn’t a “bolted” climb; Meaning there are no bolts in the rocks for easily climbing in fall protection. As Mike climbed first, he placed “protection” into the rocks. As I climbed up second, I had to stop and “clean” all the gear. The video above gives you a glimpse of how you spend a lot of time when you are “the second.” Pausing — hopefully in a spot where I only need one hand to hang on — while carefully disassembling “trad gear”. (“trad” is short for “traditional”.)

Three more shots of me just about to top-out on the first pitch. By this point, Mike and I are only a few feet apart and he’s bored out of his mind from sitting in his harness watching me climb.

Above is just a few moves from the very end of the first section of the climb. All the junk over my shoulders, and hanging from my harness is all stuff I’ve “cleaned” along the way. At the belay station, I’ll pass all that stuff back to Mike. If this was a long (that is, “multi[ple] pitch”) climb, he’d start off again, and we’d repeat the climb/clean/pass-gear cycle over and over. 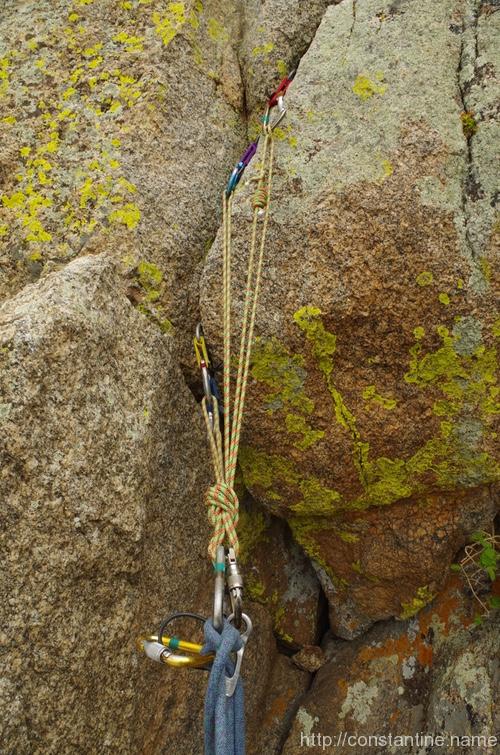 Above is a beautiful shot of a textbook belay anchor. Mike has four pieces of gear in the crack (the lowest one is pretty well hidden from view.) They’re slung together in a very particular way using a special rope (called a “cordelette”) with a very particular arrangement of knots. At the belay point, the arriving “second” would tie in, and pass his cordelette to the lead climber. (So the lead climber has a cordelette to build the next belay station.)

For this climb, the second pitch is very short. Mike could easily have climbed all the way to the top. But by stopping at the ledge, he had a great view of my climb so he could practice with his camera. This final section of rock pitched up to just the slightest overhang, and was perfectly smooth. Took me at least 15 minutes to climb 10 feet using the crack in the rock and side wall.

At the top, catching my breath at the foot of the owls. From here it was a “walk off” down the angled “roosting ramp” to a foot trail and a stroll back to the van. 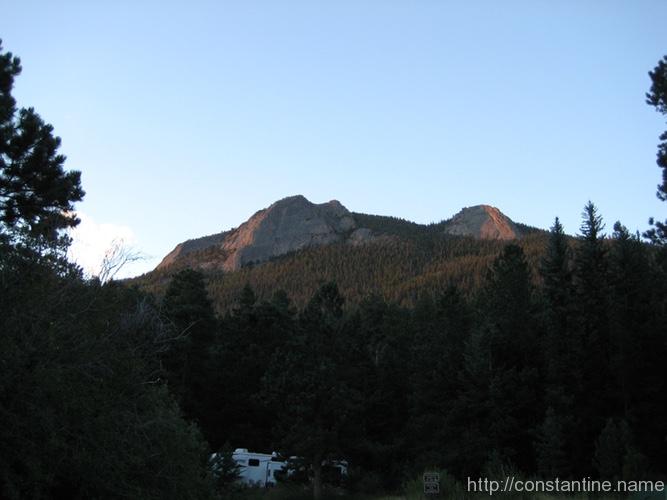 Back at our camp site, we took one last look at Deer Ridge already talking about coming back to have another go at climbing it. We packed up our camp site and headed south, back to Boulder.