Epic: This was meant to be the first climb as part of our 24 hour challenge. A classic bush-wack approach to the base of the rocks at sunrise. Then 5 pitches of traditional climbing finishing at the overlook on top of the mountain.

We got up at 4:30am, having packed everything the night before. It was pretty chilly and we were facing a good hour-and-a-half stomp through the woods. Our plan? …walk straight through the campgrounds — literally through camp sites and out the back of the campground. Then, head directly up hill until twilight brought us a good view of the mountain.

Initially, we were walking through grass-carpeted woods, and through a small meadow atop a little hill. But the further we went, the steeper it got. Until it turned into a true “class 3” scramble.

Twilight was upon us as we reached the base of the lowest spire. 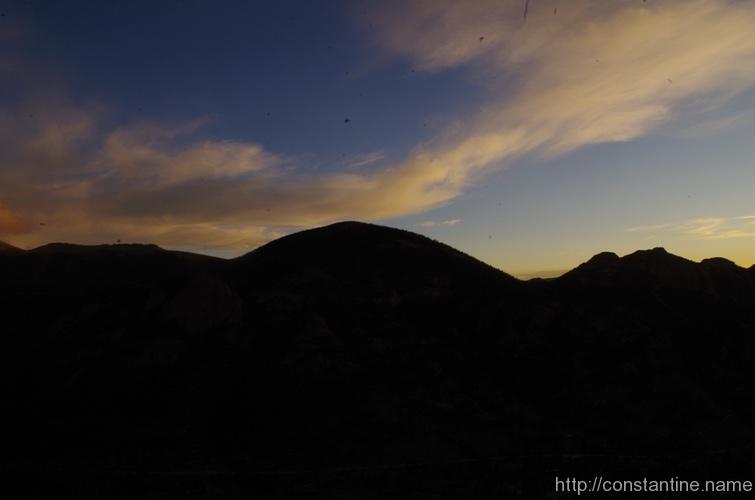 We reached the base of the rocks moment before dawn.

…and this is what the dawn “Alpine glow” looks like at 8,000 feet on Deer Mountain.

Giddy as school children — and possibly a wee bit oxygen deprived — we took a break to sight-see.

The final approach phase — yes, this is all just to get TO the climbing — is to duck around the lowest spire and climb up another 500 feet. To the left of the nose is a gently sloping shoulder called Stagway.

We totally loved that the “Notice” sign, had been there so long, that the actual notice was gone. The view from Stagway was beyond awesome, and was well worth the two hours of extreme labor to reach it’s ~8,500′ above sea level view point.

At this point, we could finally walk up to the base of the climb and assess. We were facing 30+ mph wind gusts, storm/rain clouds coming down the valley, and the first section was 80 vertical feet of crack climbing. (ie, there are no hand holds on the rock, just a crack to wedge your fingers and hands into.) We discussed it for a while, and I eventually called it off. It was just too many things weighing on the wrong side of the equation.

We snacked and discussed climbing the random looking stuff directly above Stagway. Unfortunately, the climbing guide said all the climbable lines were on the nose and to the right. On the plus side, it would be easier (in terms of technical difficulty) than climbing the nose, and just for a perk, it would be opening a new line. (Meaning no one had ever climbed it.) We figure that after one section through this stuff on the left, we could traverse back to the right, and continue up the nose’s progressively easier sections.

Unfortunately, this is also where we stopped taking photos and video as things went from being “fun”, to being “hard work.”

We setup and started up through the randomness above Stagway. After a long, long time slowly feeding rope to Mike, he stopped climbing and setup a belay point totally out of my sight. (Remember, it’s windy so we can’t communicate at all beyond a very simple rope-pulling system.) Eventually, I started up after him. I won’t say it was a mistake, because it was still fun at parts. But we spent nearly two hours, gaining about 50 vertical feet. I seriously thought Mike had been trying to write his name on the wall as I followed the rope up and down (down?!) left to right across the rocks. There was a lot of tricky climbing, and a tremendous amount of effort for almost no vertical gain.

Finally, at our first belay, with only half the gain we needed to go around the nose’s first section, we both decided to bail off. Bailing from the middle of a mountain requires leaving gear behind; You have to build an anchor, and then rappel from that anchor. You can pull your rope down, but the gear has to be left behind. Part of our plan for the 24 hour challenge included “bail gear”. That’s a small collection of things that we wouldn’t normally use, because if you used it, then you couldn’t bail off it in a pinch. This was litterly one nut, and a carabiner that Mike had found in the Himalayas that had been left behind when someone else had bailed.

It took us 10 seconds to rappel off of our two hours of work. That was followed by an hour of down-scrabble all the way back to our camp site, where we collapsed pretty exhausted. At this point the weather seemed to be deteriorating, and we threw in the towel on our entire 24-hour challenge. We never even tried to cross over to MacGregor slab. We did say, half-jokingly, that we would come back some day and get it right.

On the other hand, we both felt like climbing more, so we headed over to climb “Batman and Robin” over on Lumpy Ridge. (Which will be my next post.)

7 for Sunday
A weekly serving of 7 things for you to savor.
On Sundays I send a free email contains my reflections on interesting things I find laying about seasoned with some quotes from my collection. No hooks, no affiliate links, no guest posts— Here's what to expect. Like? Sign up.